ROCAMAT was created in 1853 under the name of Civet Fils et Cie. It was transformed into Civet Pommier et Cie in 1898, into Carrières et Scieries de France in 1927 and became ROCAMAT in 1971. From the outset, the company was a major producer of limestone for construction.

In 2005, the company was bought by LBO France, which, 10 years later, ceded control to another fund.

In 2018, the company underwent major restructuring, its capital reverted to being mainly family-owned and the Quebec group Polycor took a minority stake.

Since then, ROCAMAT has continued its development by highlighting the know-how that is the basis of the unique beauty and the sustainability of our architectural heritage. 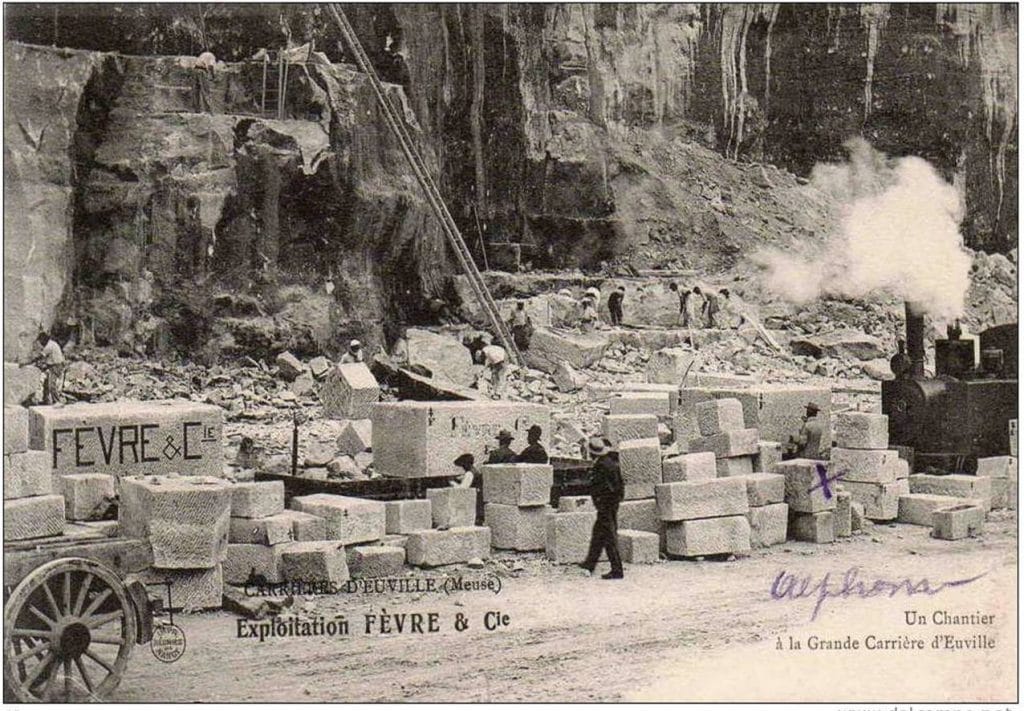 From the quarry to the construction site

At the international level we are the major player in the production of building stone and the leading producer of natural stone in France. ROCAMAT is a company sized and structured to support you in the realization of all your natural stone projects.

ROCAMAT sells the materials extracted from its quarries and transformed in its factories to the construction market: blocks and slabs, floor and facade coverings, marble work, sawn and carved elements...
Its integration of the quarry on the site and its recognized competence allow it to play a role of prescriber in its market. Thus, ROCAMAT participates in major architectural achievements: prestigious buildings in the United States and in Asia, major projects in Paris (Musée d'Orsay, Grand Louvre, Bercy, Eiffel Tower, Vuitton Foundation, etc.)
ROCAMAT achieves 20% of its turnover from exports, we deliver our products to five continents for both high-end residential projects and architectural projects.

Discover all our quarries

ROCAMAT owns 1,500 hectares and extracts 35,000 m³ of blocks per year throughout France. The ROCAMAT catalog contains more than 50 varieties of limestone among the most famous of the French subsoil (Comblanchien, Chassagne, Buxy, Euville, Saint-Maximin, Chauvigny, Sireuil…). Each of our stones, strong in the values of its original terroir, recalls a part of our heritage: 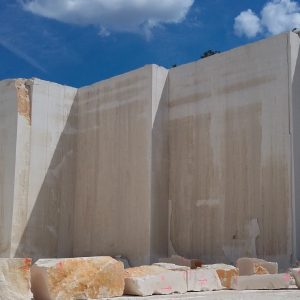 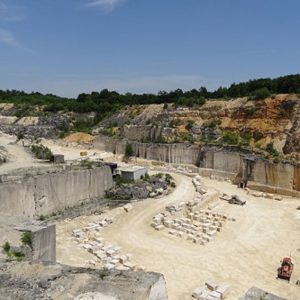 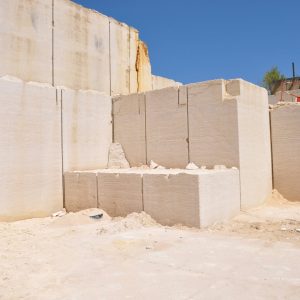 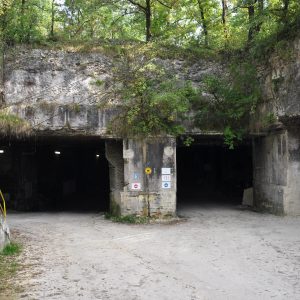 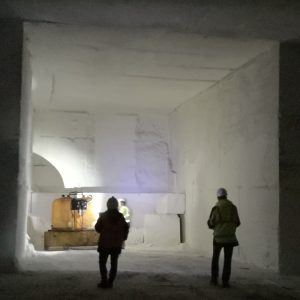 Discover all our stones

We extract stone blocks from 2 to 10 m³ from quarries. The stone blocks are cut, either by means of diamond wires driven by electrical energy, or by mechanical cutters. As the stone is always slightly damp, there is no generation of volatile dust on the site.

The operation of a quarry requires obtaining an administrative authorization, materialized by a prefectural decree. This text describes the conditions of operation and restoration of the site at the end of operation.
Quarry operations are subject to very strict French laws in this area: mining code, environmental code, regulation of classified installations, labor code. A study of the impact of the future quarry operation on the environment is required by the French administration to obtain an operating license.

The company is particularly vigilant in terms of compliance with the laws and regulations which are prescribed both at the level of the prefectural decree and of the legislation inherent to Classified Installations. ROCAMAT's compliance with regulations is regularly monitored by DREAL (Regional Directorates for the Environment, Planning and Housing).

Impact on surface and groundwater

The prefectural decrees governing quarries located in sensitive areas recommend the installation of piezometers, analyzes or colorimetric tracing. The company applies these recommendations and no mess has ever been observed. The parking and minor maintenance of the machines are carried out in watertight areas in the quarry.

Impact on the landscape and on the human environment

Impact on the landscape and on the human environment: The impact on the landscape is directly reduced by respecting the recommendations for restoration stipulated by the prefectural decree. An annual update is made site by site and transmitted, as part of the updating of financial guarantees, at least every 5 years to the administration.

Impact on the natural environment

Within the framework of the authorizations to exploit a fauna and flora inventory is carried out. If a clearing is necessary for the continuation of the exploitation, it is governed by a specific authorization of clearing issued by the Prefecture. The clearings are carried out outside the periods of nesting birds or laying reptiles. Many quarries (active or abandoned) are the subject of agreements with naturalist associations (fauna, flora, birds of prey, bats, etc.) and / or with regional conservatories of natural areas.

Measurements are carried out regularly by an external firm, the frequency of these checks is defined in the prefectural operating decrees.

In the quarry, the materials that do not enter our transformation process (offcuts, unsuitable materials) are either riprap or backfill materials for public works sites, or kept on the site to redevelop the areas. exploited. These co-products are “waste” made up solely of totally inert mineral matter.

Our processing plants in France

Discover all our processing sites

Our 4 industrial sites located in Ravières, Saint-Maximin, Vilhonneur and Chauvigny offer the transformation into sawn slices of the rough blocks squared in the quarry. The slices are cut to the desired shapes and dimensions, according to the desired use. Our workshops also carry out surface finishes using modern means: polishing, bush hammering, layage and flaming. 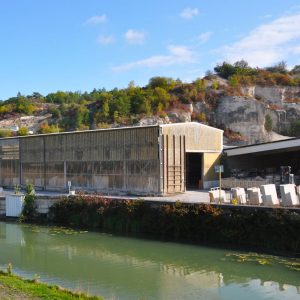 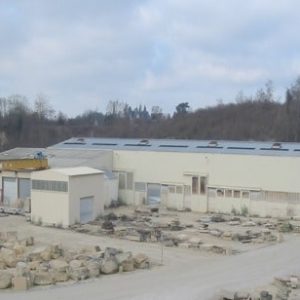 A clean and human industry

We transform the stone blocks coming from our quarries in our 5 specialized factories. The stone is cut by means of machines driven by electric energy. The cutting lubricant is water. No cooking, no chemical additives are necessary.

Impact on groundwater and surface water : The sawing water, used during manufacturing, works in a closed circuit. The used water is decanted or passes through a mud press which separates the solids from the clean water. The sludge, once dry, can be used as a limestone amendment for agriculture. The clear water is returned to the plant circuit. The water does not undergo any treatment and is not released into nature. A study on the recovery of sawing sludge is being carried out at the CTMNC (Technical Center for Natural Building Materials).
Impact due to waste: ROCAMAT has set up selective sorting and specific disposal treatment channels on all of its sites, depending on the type of waste.

Impact on staff safety : The Safety department's mission is to reduce work accidents, improve working conditions, and manage employees in terms of safety through local supervision. To do this, a certain number of tools have been established and implemented over the past ten years and relate to:

We pay particular attention to the ergonomics of workstations to prevent occupational diseases such as MSDs (musculoskeletal disorders). Each investment or installation project for new equipment is managed by the “new works” department in consultation with the industrial department, the security and maintenance departments. Improvements in working conditions, risk prevention, ergonomics, as well as impacts due to noise and vibration pollution are systematically taken into account for each workstation arrangement. These projects are then presented and commented on to the members of the CHSCT in order to collect their comments before final validation.

Training and safety awareness represent nearly 5,000 hours of training each year for the entire group. 60% of our production staff is first aid trained.

Learn more about our activities